Since 1923, the U.S. Army Military Police Corps have proudly worn the Harper’s Ferry crossed pistols insignia on their uniforms. Accept no substitutes. Harper’s Ferry Pistols celebrates members of the Military Police by making the world’s only authentic replica 1805-1808 U.S. Marshal “Harper’s Ferry” flintlock pistols. Since day one, we have molded each model from an original gun and hand-painted every detail. As a result of this promise, the quality of our awards is unmatched. Shop the collection.

Over 200 Years of U.S. Military History Built Into Each Piece

At Harper’s Ferry Pistols, we have returned to the early days of the U.S. National Armory. We mold each model from an original 1807 “Harper’s Ferry” flintlock pistol and paint them by hand.

Thanks to precise methods, every piece is exactly how it looked over 200 years ago. Because of these efforts, veterans and collectors alike have been paying tribute to Military Police Corps history with Harper’s Ferry Pistols since 2006.

Every pair of replica pistols is true to life. They are built to scale using high-strength materials and bear the same markings as the original. In addition, even the finest details are visible from all angles, thanks to 3D molding technology.

On both the desk and wall mounted plaques, the pistols sit in a crossed formation, right over left, the same as the Military Police insignia itself.

Why the Name Harper’s Ferry?

In 1799, President George Washington established the United States Armory and Arsenal in the community of Harpers Ferry, West Virginia.

At the time, President Washington chose the site for its location. The village was located where the Potomac and Shenandoah rivers meet and was at the heart of the young country’s railway network.

At the time, the Baltimore and Ohio railroad bridge was the country’s only bridge over the Potomac that could carry heavy loads. Since the bridge was located at Harpers Ferry, fuel and foundry supplies could easily travel to the armory. Later, the army used the rail network to send arms to the rest of the country.

The Harpers Ferry National Armory began production in 1802. A small group of gunsmiths made the muskets, rifles, pistols, and cannons that outfitted U.S. Marshals and the U.S. Army.

The Harper’s Ferry gunsmiths improved methods of production. As a result, they made it possible to manufacture firearms at a record pace. Standard parts and new machining techniques allowed them to build high-quality arms with speed and care. Prior to these changes, gunsmiths had to forge, engrave, assemble, and paint each piece one at a time.

Today, we bring back the work of early gunsmiths. Our products recreate the historic pistols in celebration of the United States Army Military Police Corps. These plaques and awards are ideal for Military Police retirement gifts, promotion or PCS awards, and for antique gun collectors.

Harper’s Ferry Pistols is owned and operated by JASTRO Enterprises Ltd., a Canadian company based in Vancouver, British Columbia.

Shop online 24/7 using the payment methods below. All transactions are guaranteed to be secure, and most orders ship within 2-3 business days. 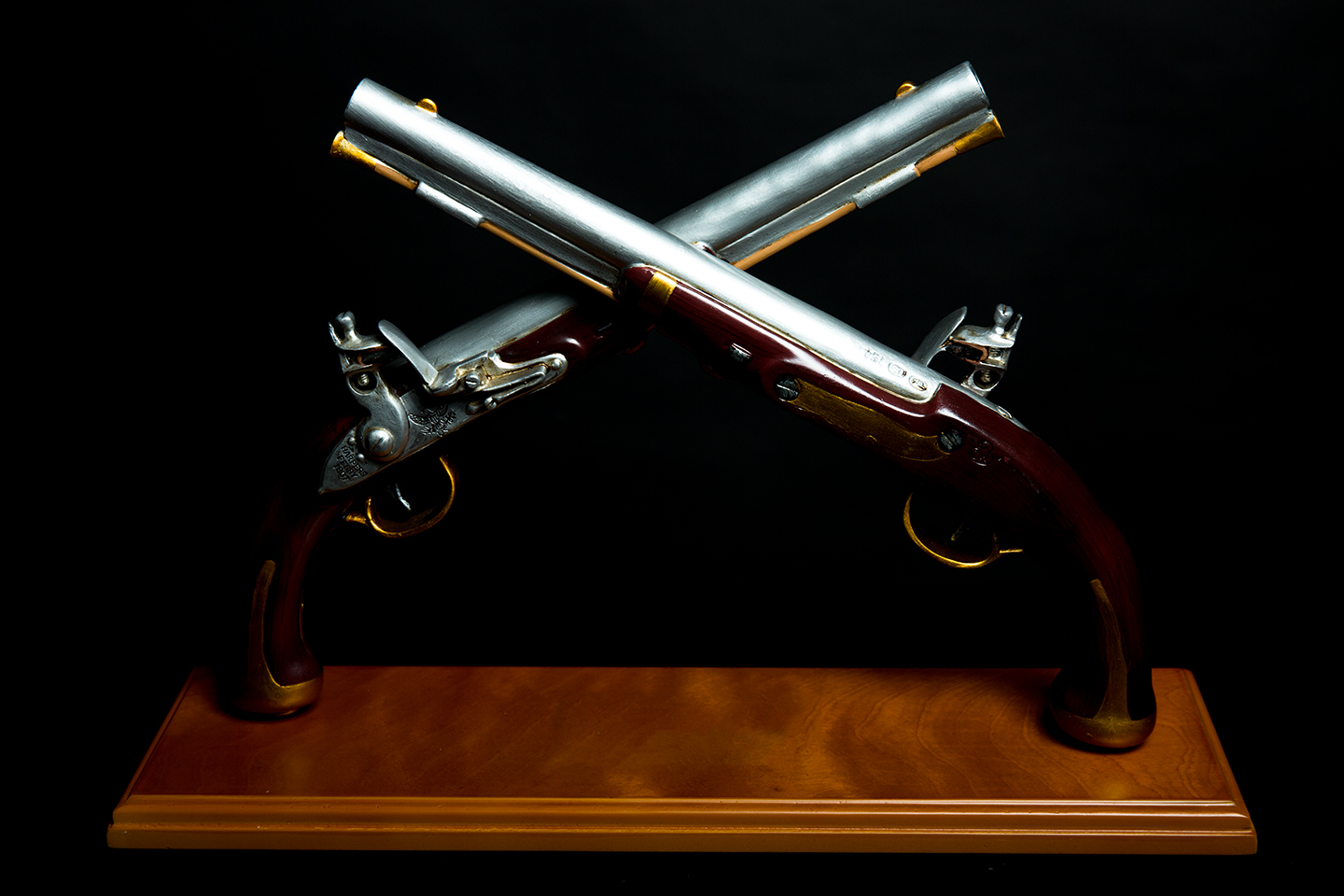